You are here: Home / Photography / Tasmanian Devil Facts and Pictures 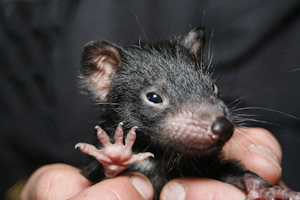 Tasmanian Devils are unlike any other animal in the world. Although only the size of a small dog, their horrendous screeches led early Tasmanian settlers to name them Devils. Up until maybe 400 years ago they were widespread throughout Australia, but now they can only be found only in Tasmania. It is thought that competition from dingoes led to their extinction on the mainland. 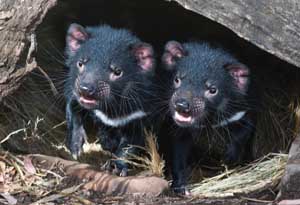 Like many of Tasmania’s native animals, devils are marsupials. This means that they are born very immature and develop in their mother’s pouch. The mother gives birth to 20 – 40 young, each about the size of a grain of rice. She has only four teats, so the first four to get to her pouch have any chance of survival. There they stay for the next four months until the mother leaves them in a den, returning frequently to suckle them and teach them how to find food. They become independent at nine months of age and mature at about two years old, living for five or six years in the wild. 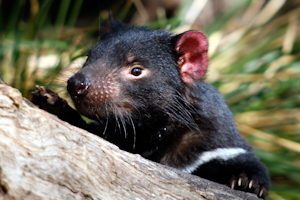 Devils are carnivores. Although they hunt small prey such as bettongs, birds, fish and reptiles, they eat carrion more often than not. They have extremely powerful jaws and will devour an entire animal in a sitting – meat, fur and bones, leaving nothing.

The early European settlers believed that devils were a threat to their livestock, so in 1830 a bounty was placed for every devil killed. They almost became extinct, but were saved in 1941 when a law was passed protecting them. They are now in danger again from the Devil Facial Tumour Disease which is spreading rapidly throughout the population. Scientists are currently working very hard to save them from extinction. 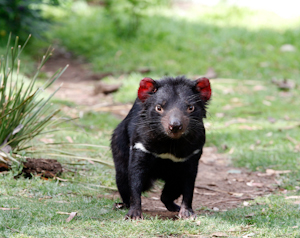 The Tasmanian Devil is an iconic Tasmanian animal. It is the symbol of the National Parks and Wildlife Service, as well as numerous Tasmanian sporting teams. Many tourist attractions and products feature devils. It would be a tragedy to lose them. To find out how you can help, check out the Save the Tasmanian Devil Appeal on the web. 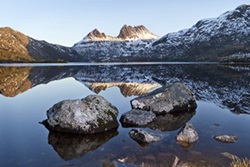 “Mike has a colourful range of postcards, greeting cards, books, calendars and diaries which all fit on his stand in my shop. They sell well and he calls in regularly to keep the stock up to date.”
Leigh Mahony, Store Manager, Naturally Tasmanian